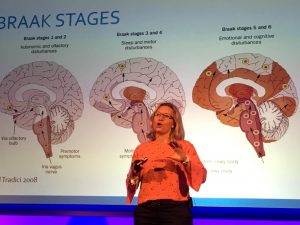 Melissa is a clinician, educator, author, entrepreneur and thought leader. Recognised as a Specialist Neurological Physiotherapist in 2010 by the Australian College of Physiotherapists, she holds this title as one of only 8 in Australia. Academically, she also holds a Master of Health Science (Neurological Physiotherapy) and Grad. Certificate in Public Health. Melissa has been very active in the Australian Physiotherapy Association and currently sits on the NSW Branch Council. She is past chair of the Neurology Chapter in NSW and NSW National Representative. Currently Melissa holds the position as Co-director of International Neurological Physical Therapy Association (INPA) for the World Confederation for Physical Therapy.

As an educator, Melissa has taught thousands of physiotherapists, exercise physiologists and fitness professionals in topics ranging across Stroke, Polio, Multiple Sclerosis, Parkinson’s disease and Technology in Rehab. She presents regular evening lectures and workshops for the Australian Physiotherapy Association as well as for PD Warrior and Advance Rehab Centre. Melissa has also presented at many National and International Conferences as invited speaker and has recently been appointed Adjunct Professor at La Trobe University. Melissa also coordinates the internship programs for Physiotherapists and Exercise Physiologists with ACU and Macquarie University.

Melissa established Advance Rehab Centre in 2006 as a specialist neurological outpatient and home based rehab facility and she has grown this to a team of 75 staff with an outstanding clinical track record and team culture. The centre is dedicated to clinical excellence and innovation and has produced some world class programs, least of all, PD Warrior, which became an independent entity in 2015. Advance Rehab Centre was awarded the Australian Allied Health Practice Excellence Award in 2019 and was a finalist in the HESTA Excellence awards and Small Business Champions Business of the Decade in 2020. PD Warrior is now taught and licensed internationally to other physiotherapists and health professionals in four languages across 10 countries. Melissa is an active CEO of both companies.

As a thought leader, Melissa has led the way creating exercise programs incorporating intensive neuroplasticity training principles for people with neurological conditions such as Parkinson’s disease, Multiple Sclerosis, stroke and brain injury. In 2018, Melissa pioneered the first online global Summit for Parkinson’s disease, using cutting edge technology, this three-day summit was streamed live into people’s homes removing the need for travel and accommodation expenses, well before COVID demanded this transition to digital conferences. This summit has since raised $150,000 for global Parkinson’s charities and has hosted over 150 world class speakers.

In 2020, Melissa purchased the first LEXO® End-effector Robotic Gait Trainer in the world and leads the way in the use of Robotics and technology in rehabilitation in Australia.

As an author, she published the Amazon Best Seller “The New Parkinson’s Treatment: Exercise is Medicine” in 2014 which has since gained distribution rights with Simon and Schuster and is into it’s second edition. She also contributed to the publication “The Late Effects of Polio: Managing Muscles and Mobility” as part of the Polio Australia Clinical Advisory Group.

Melissa is the winner of several awards including Australian Physiotherapist of the Year in 2019 and APA Contribution to the Profession Award in 2019 and in 2020, Melissa was awarded as the Small Business Champions Entrepreneur of the Year.